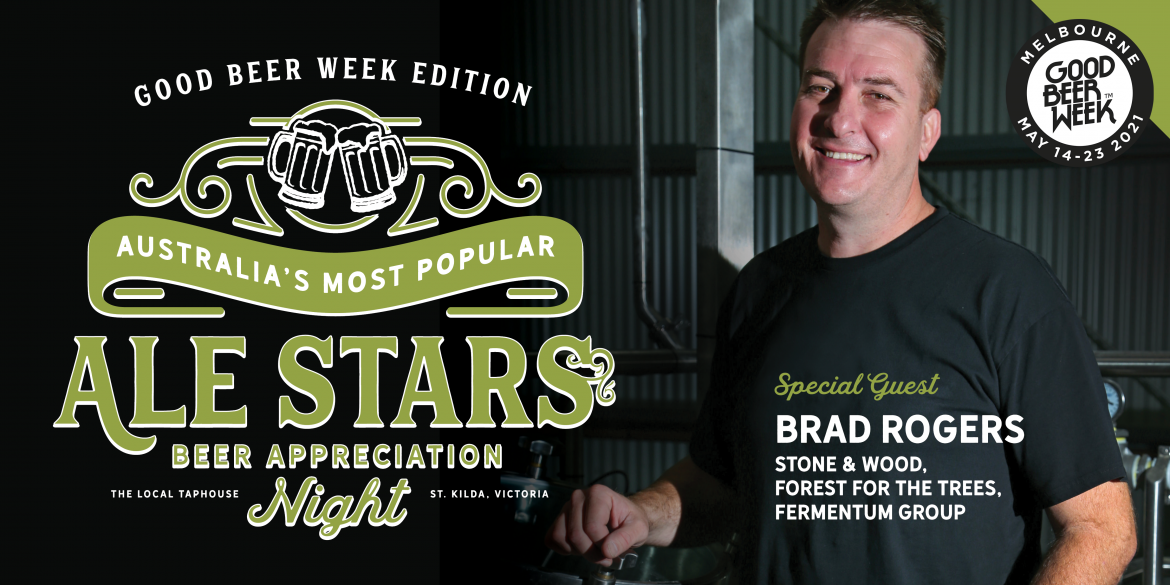 Join us for this year's Good Beer Week edition of Australia's most popular beer appreciation night, Ale Stars. In our GBW edition, it’s only fitting that we host a legendary Aussie craft beer trailblazer who has had a massive influence on the industry and helped shape the scene into what it is today. With that we bring you... Brad Rogers!

There’s no question that Brad's brewing experience is an impressive and extensive read. In the early 2000’s, he started experimenting with farmhouse styles and brewed one of the first commercially available saisons in Australia, which went on to win bronze at the prestigious 2006 World Beer Cup.

Since then, from modest beginnings in a shed in Byron Bay in 2008, Brad has helped grow Stone & Wood into a multi-award winning staple in the Australian craft scene, with their flagship Pacific Ale taking the #1 spot in the GABS Hottest 100 Craft Beers of the year poll three times, and featuring in the top three consistently since 2010.

His exciting new venture, Forest For The Trees, is dedicated to farmhouse, sour and wild beer styles, bringing his passion, experience, knowledge and skills as a trained winemaker and well-travelled brewer to create beers that capture the philosophy and culture of days gone by with the technology and ingredients available today.

On our lineup is five beers from the family of breweries:

Join us for all the usual Ale Stars fun, games and trivia from host Shandy!

Tickets include a meal and the beers above.

What else is on at The Local Taphouse #GBW2021

We'd be in right strife if we didn't bring back this super popular SpecTAPular! Two floors, 20 British beers on tap, and cask, including Fuller’s, Tetley’s, Thornbridge, Gypsy Hill and Tiny Rebel. Plus Britpop tunes, British food, games and more!

Beer and cheese - a match made in heaven. Let two experts guide you through five amazing pairings.

Ten years on and still going strong, it’s the dinner described by Broadsheet as "one of GBW's most consistently popular events".

Enjoy a breakfast of champions in the place where GABS all began! Enjoy breaky, a tasting paddle or two, then jump on the bus direct to GABS. A goodie bag will be provided to get you through the big GABS day. This event sells out, so get in quick!